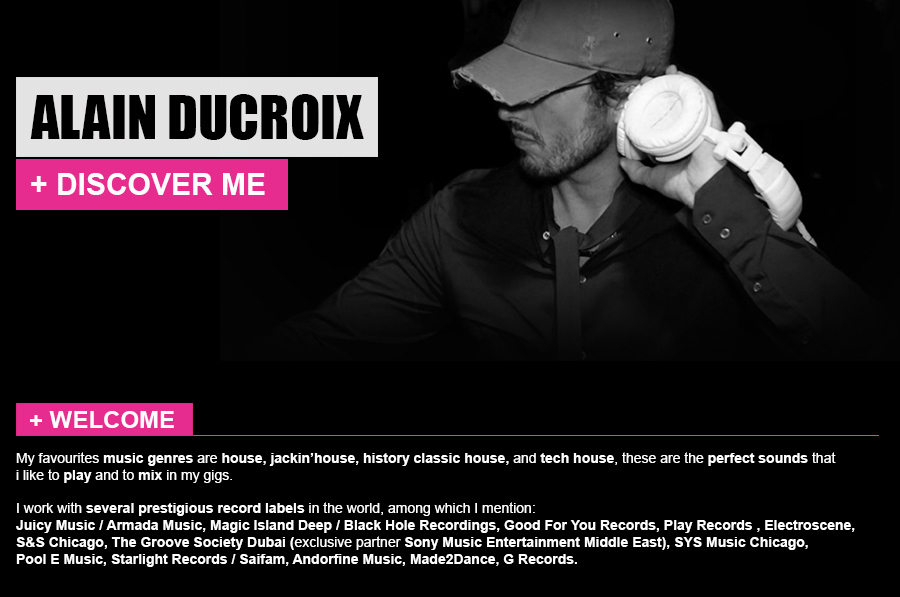 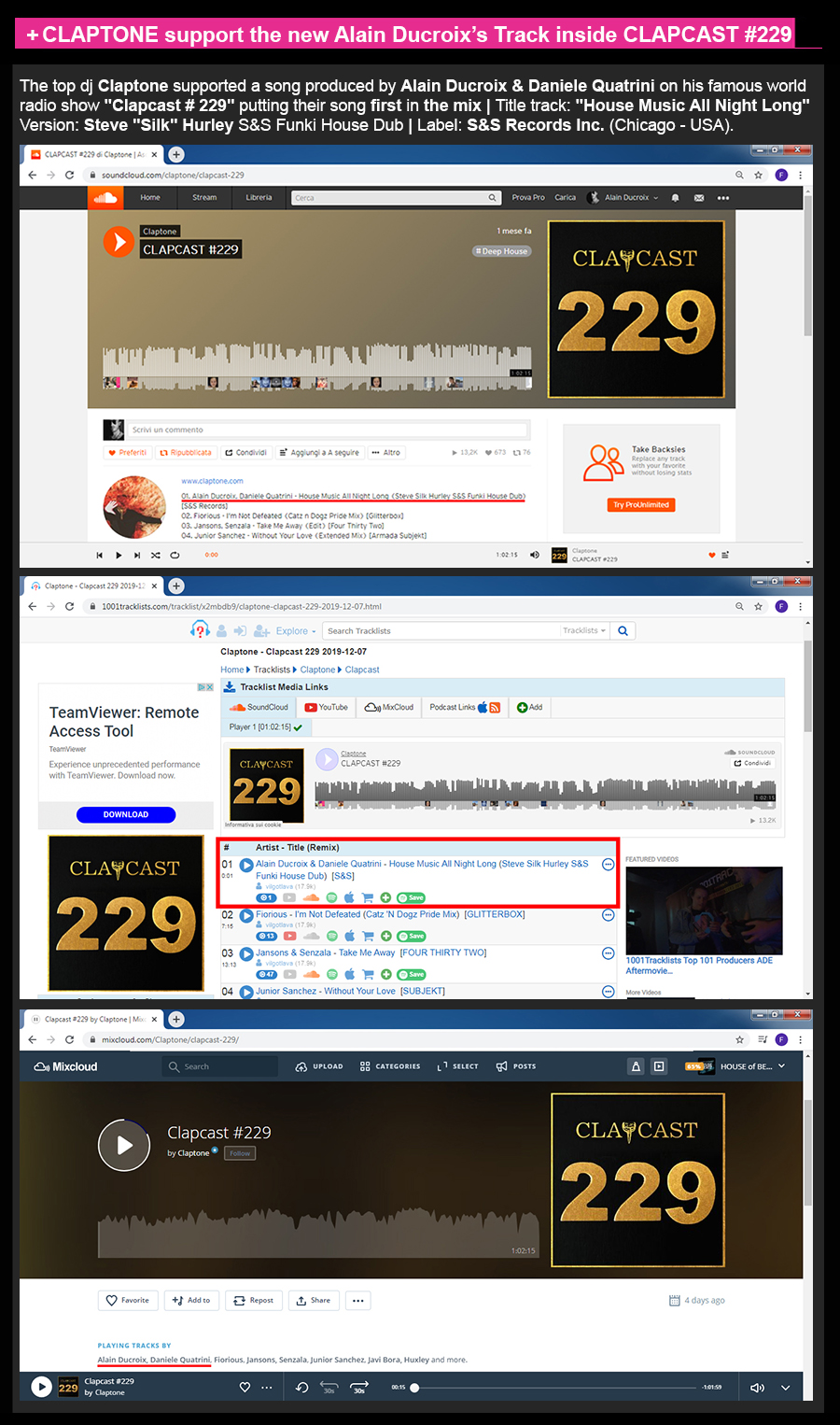 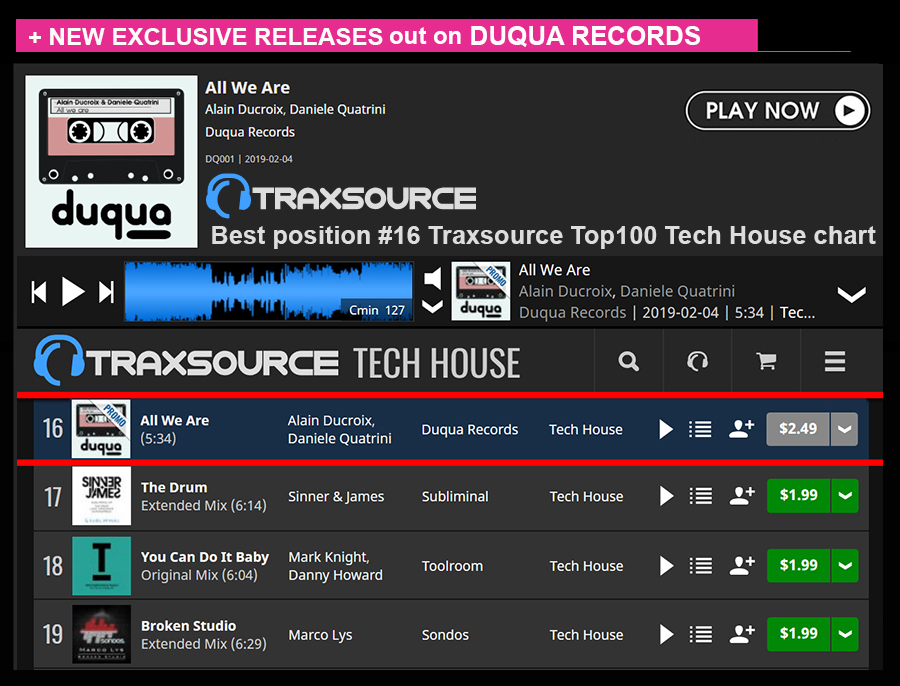 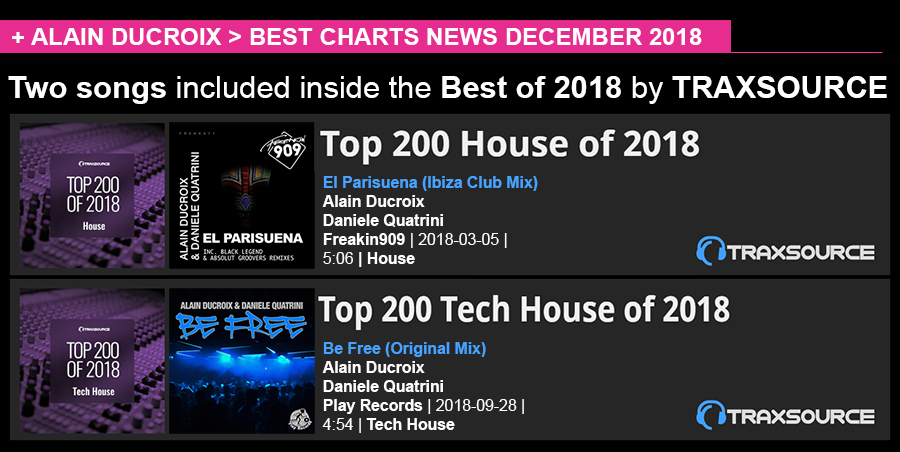 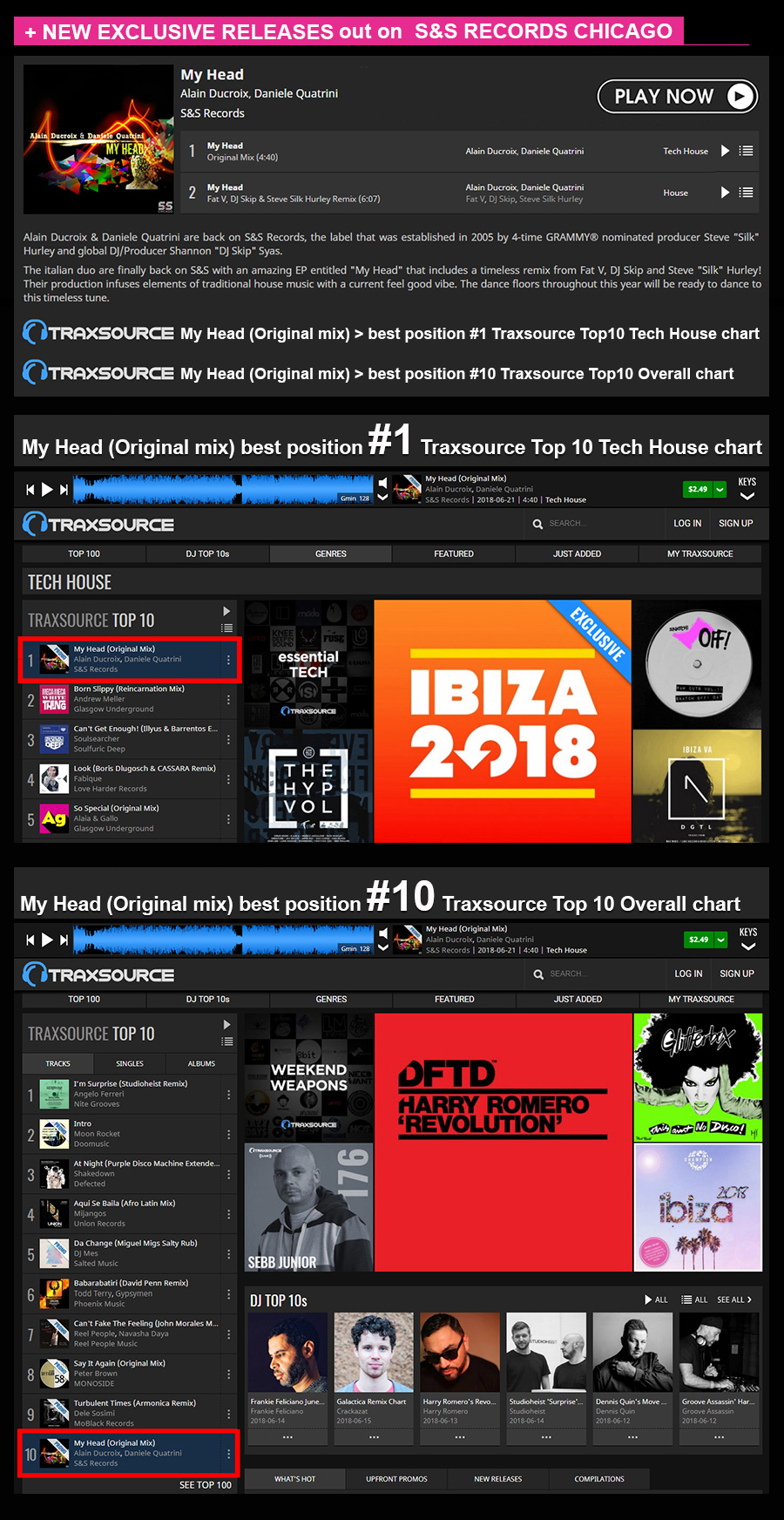 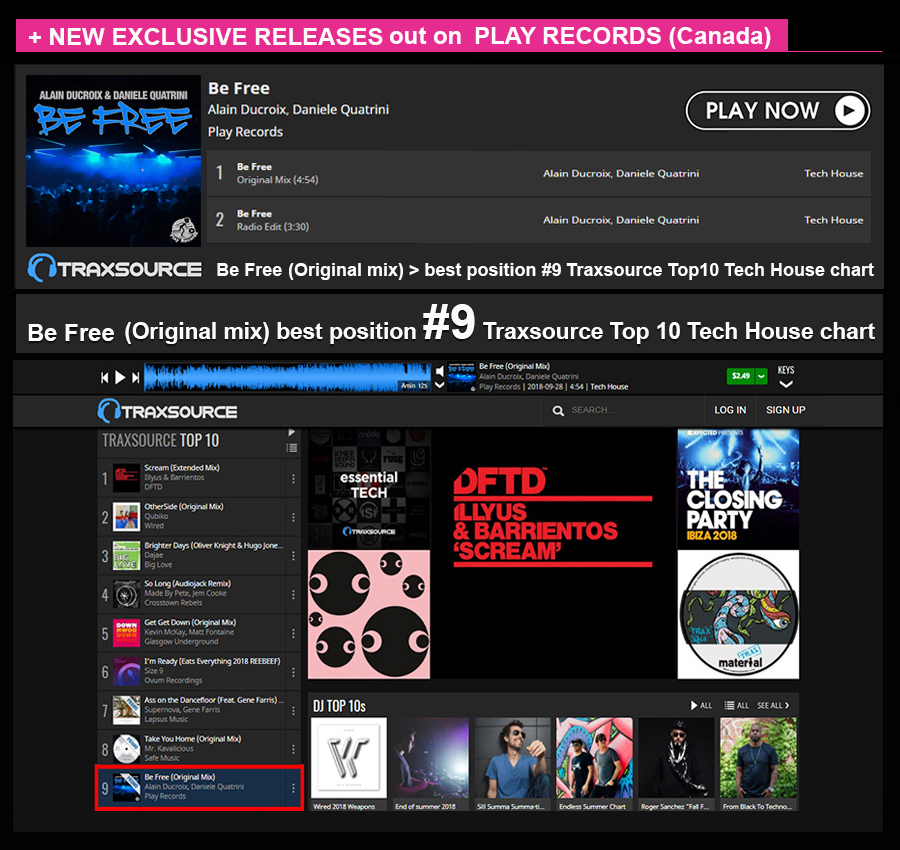 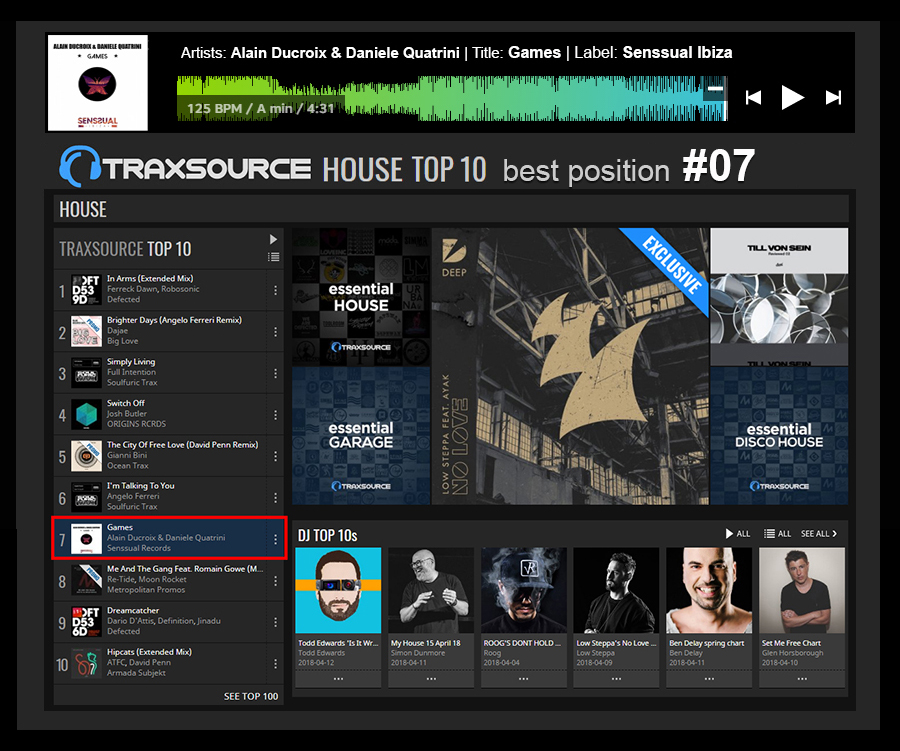 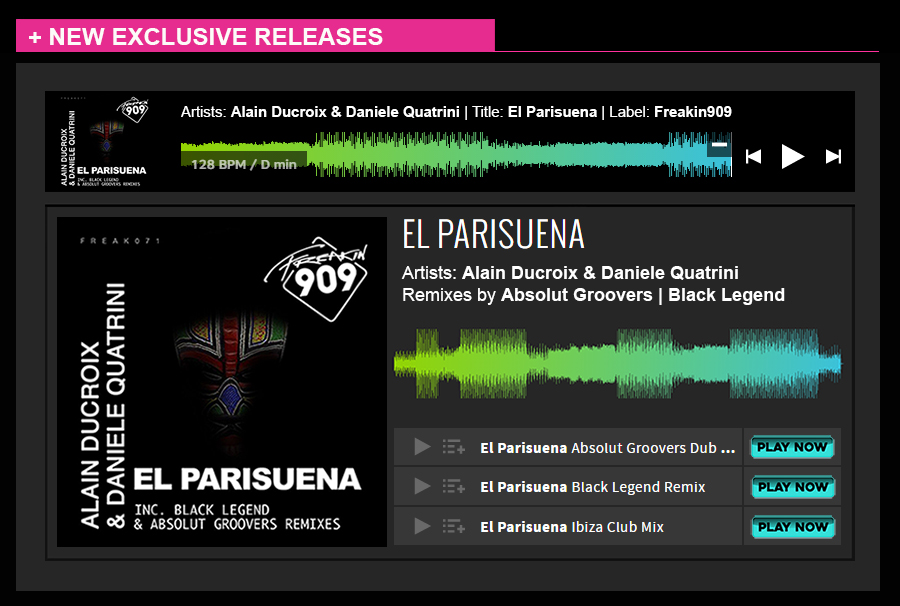 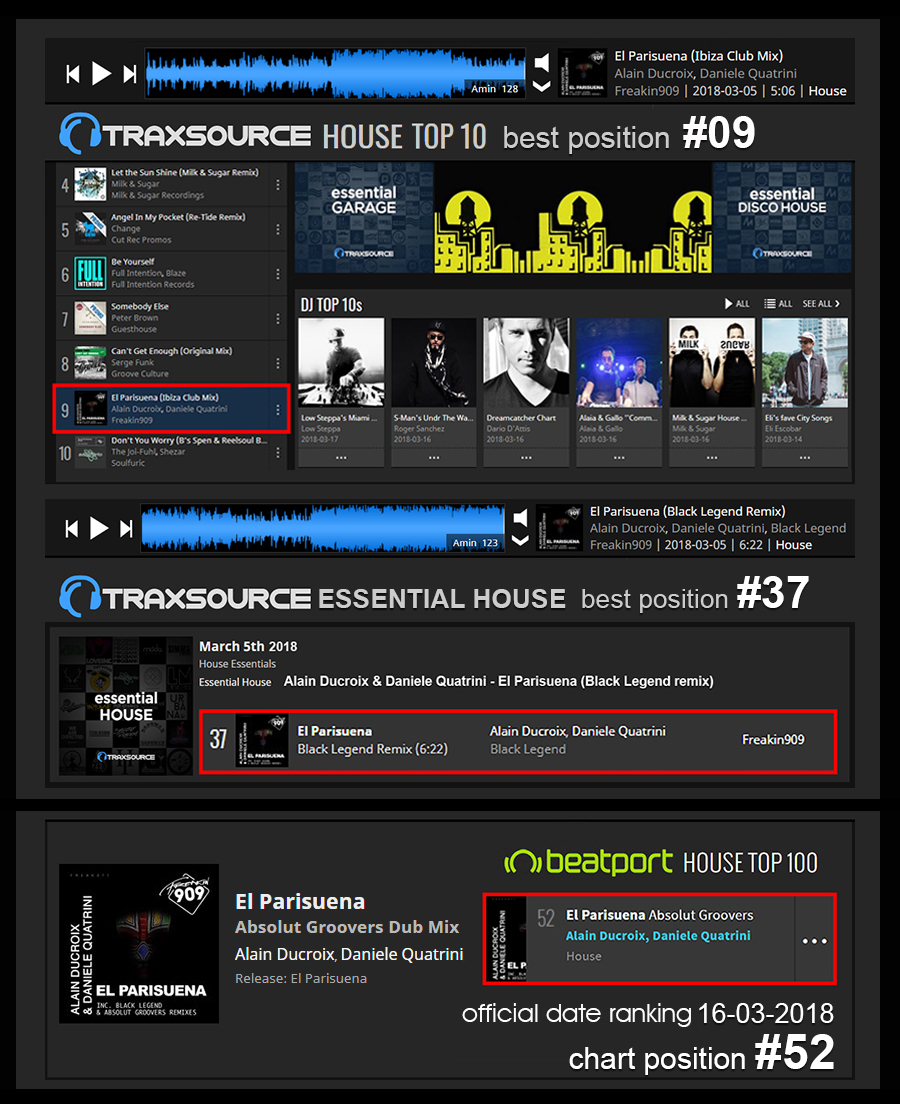 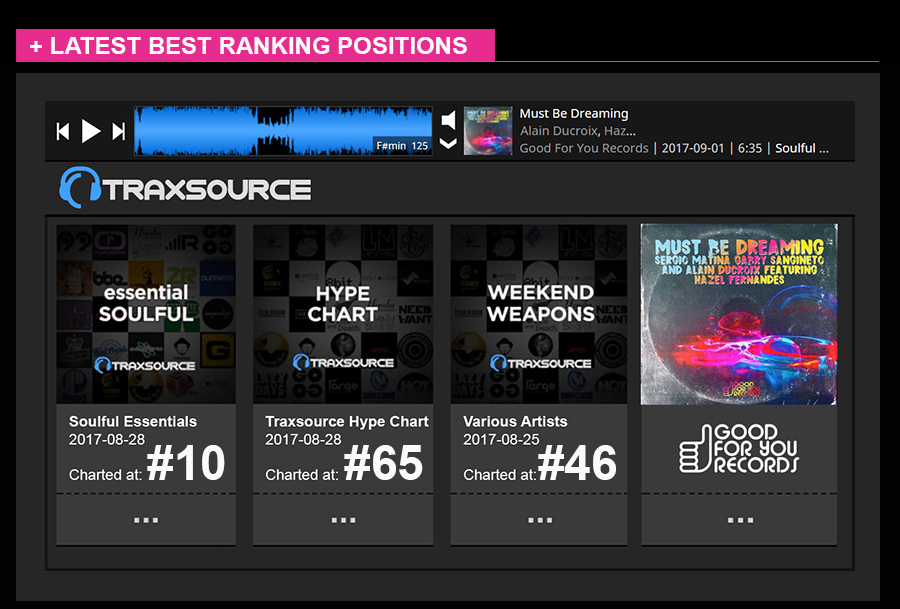 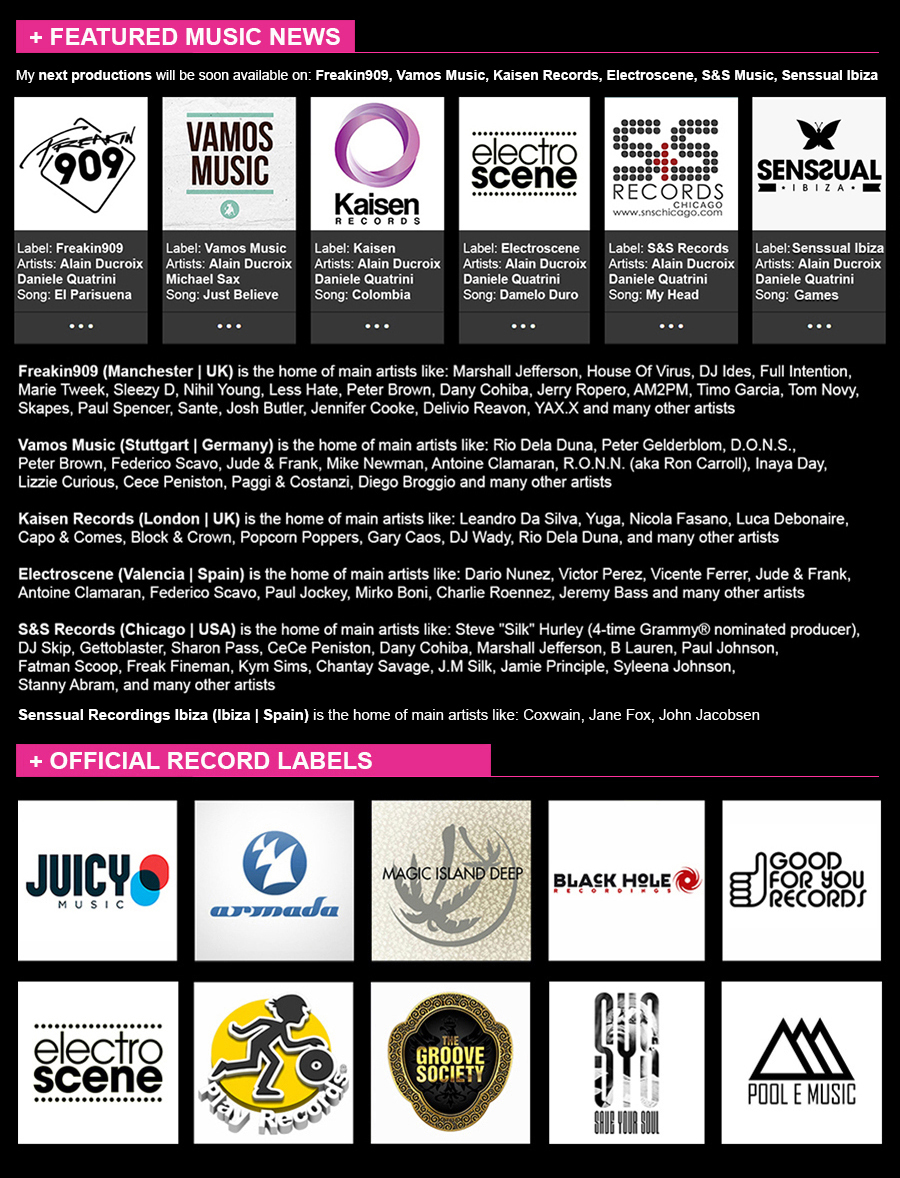 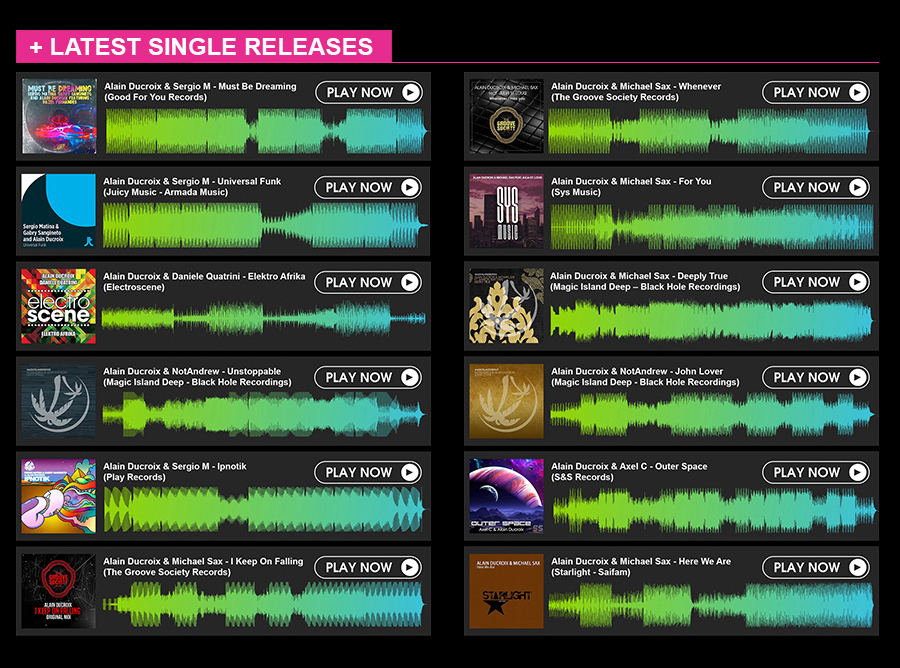 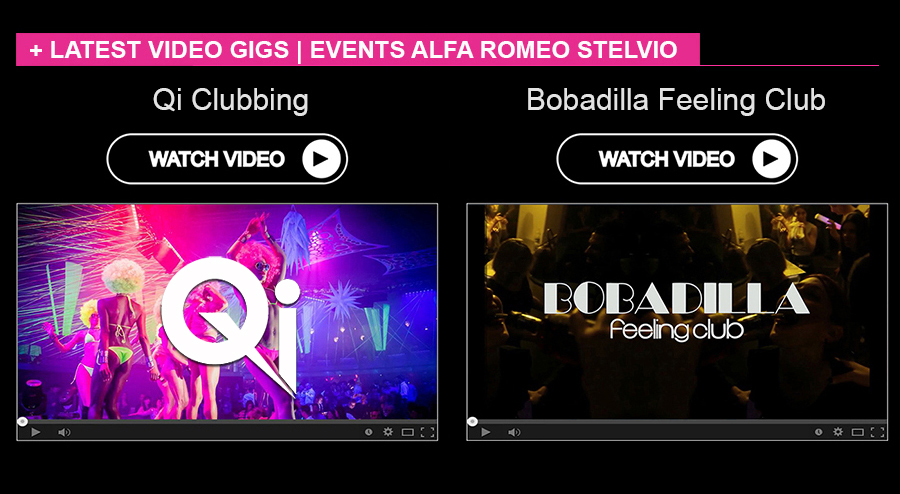 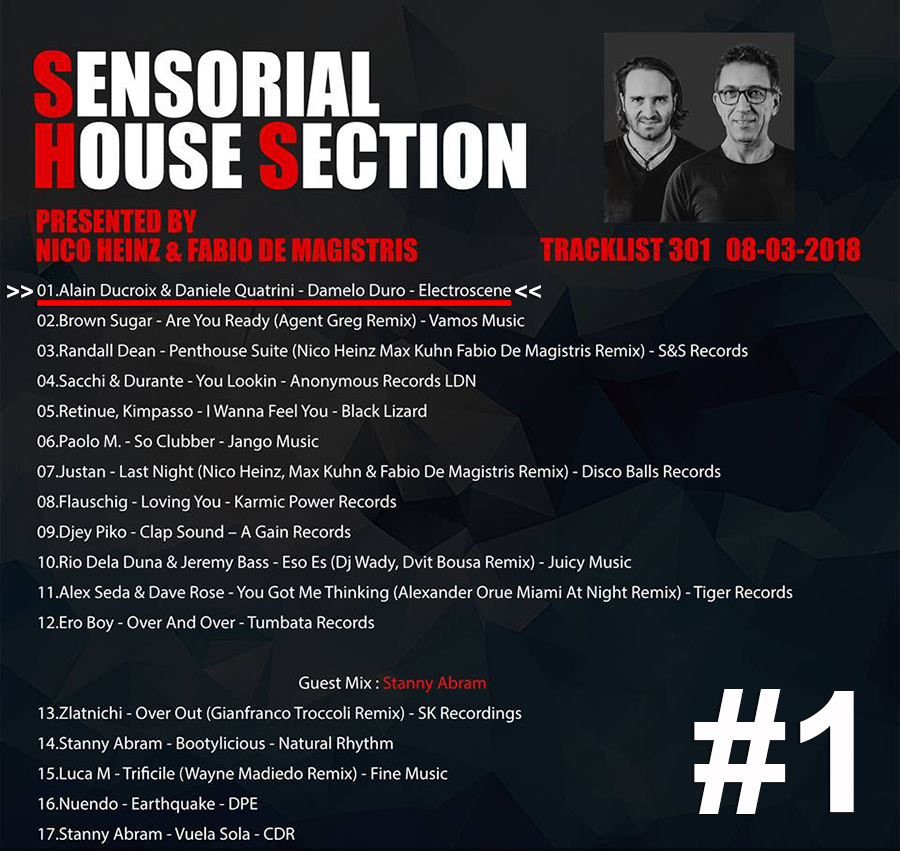 most important: Alain Ducroix is the main guest deejay of Clubtelevision Tv  www.clubtelevision.tv

Alain is a DJ / producer who works with several prestigious record labels in the world, among which we mention:

These are the results and the placings of my last productions in the various rankings:

“Must Be Dreaming” produced by Alain Ducroix with Sergio M. (Good For You Records) https://www.beatport.com/release/must-be-dreaming/2167728

The track “Must Be Dreaming” on Sensorial House Section September Chart 2017 @ Traxsource
https://www.traxsource.com/title/869613/sensorial-house-section-september-chart-2017

– The track “Here we are” by Alain Ducroix & Michael Sax best position #8 (Top 30 singles) on The Music Blog (June 2016)
Individual house useful for all the deejays of the globe, to be used in party occasion, parties or evenings with house music.
1000 missed hits that dusted the much sought after House music (past, present and future) for the fans of this music portal lovers of a
musical type disco. Top 30 singles, here is the first part of this special selection – © Themusicblog.eu:
http://www.themusicblog.eu/top-1000-tracce-house-per-deejays-prima-parte/
– The new track “John Lover” by NotAndrew & Alain Ducroix out inside ”Magic Island – Music for Balearic People Vol.07
mixed and selected by Roger Shah” June 2016 – label Magic Island / Black Hole Recordins
Beatport : https://www.beatport.com/release/magic-island-music-for-balearic-people-vol-7/1775092
– The best album “Magic Island – Music for Balearic People Vol.07″ mixed by Roger Shah (with inside the
new track “John Lover” by NotAndrew & Alain Ducroix ) Already in the most important world charts:
N.1 in Mexico, N.2 in Russia, N.12 in USA (United States of Amaerica), N.14 in Holland, N.16 in Germany
All records (releases) produced by Alain Ducroix, arechieving excellent results in prestigious rankings
and radio show very major international shooting !!
The latest tracks (2016) produced by Alain , were in the best Itunes and Beatport chart , and they have been
included in the most important compilation of the moment !

The track “Here we are” and the track “Deeply true” by Alain Ducroix & Michael Sax  out on Starlight Records (Saifam) and
Magic Island Deep – Black Hole Recordings, they have been included in several new compilation, including:

From April 2017 Alain Ducroix is the official guest deejay at “Red Carpet Night”
A tour organized by Clubtelevision Tv, to present to the people in the clubs “Stelvio Alfa Romeo” in collaboration with Baccanelli Spa

Deeply true inserted and selected in the official compilation “Black Hole Presents Miami Essentials 2015″
made for MIAMI WINTER MUSIC CONFERENCE
Year 2015 , Alain’s new single titled “Never let you go”, out on the record label
Influence Recordings/Pool E Music – exclusive track on Beatport (Beatport exclusive)
Alain is quite hard to pin down when you talk about DJ style, his taste in music ranges from some of
the more commercial House/Deep House and Radio Hits tracks that you hear in the clubs or even see
in the charts to the more House type tunes that are rather more refined.
His theory when in the console is ‘If I like it and I know my public are going to like it
then I will play it’….
This attitude to DJ’ing has seen Alain play at numerous clubs up and down the Italian territory as
well as private parties and exhibitions.
He also held down a Summer residency not so long ago at Space in Mykonos where his parties went
down a storm not only with the Italians that were there holidaying on the Island but also the locals.
Year 2014 , the latest news on Alain including his up and coming releases:
– in March and May for the Made2Dance label in Holland
(two songs “Put your love in me” and “Eternity”)
– in November for the G Records label in Italy (song “In my mind“)
These tracks come in different charts and various compilations very important
and are supported by many dj’s !!
In the May 2012 produced the first his album “Start Over” for an italian record label(G Records).
This album containes the hits Fly in the sky , Strong House, I love sax, Ibiza 2012,
that are been subsequently included in addition in over one hundred compilations.

After attending art school show MAS Music & Arts Show in Milan has begun to take the first steps
in show business until landing in small radio stations that carried him for a variety of events,
fashion shows and musical events.

The natural evolution leads him to journalism in the music and nightlife, which will be the springboard
for run television.

Among the magazines that have articles with his signature remind Nightlife Magazine , Tendence Europe,
Jock’s Mag, The Night Magazine, The guide delNottambulo, afterhours, etc..

When switching between television and disco nights as a deejay, remember that there are numerous events
presented by him.

In 2007 Alain Ducroix produces and presents the new program (on Tv) is called CLUBTELEVISION a new circuit
television entirely dedicated to fashion clubs, events, clubs and all of its protagonists, the nightlife , social events and parades.

Clubtelevision (www.clubtelevision.tv) is visible on the Internet and on network television NOTTIBRAVE
TV, visible throughout Italy on several television channels and a channel Sky.

Alain Ducroix belongs to the team that has mixed and has selected the Space Dance Mykonos Xperience Vol.04 (summer 2011)

With Clubtelevision has organized several tours and events for various companies such as:

If you want to book our deejay for your club , send an email to : info@clubtelevision.tv